A moment of insanity and a moment of enlightenment

That was my Saturday. It was a big day for our gym as we hosted our first in-house tournament (the Hellfish International In-House BJJ Tournament) where we invited other schools from Team Balance to come fight us. Considering it was the first time that we tried to run a tournament, I think it went very well.  We were done at a reasonable time, everyone got at least 2 matches,  there were some really awesome medals and even a black belt superfight, all for $30! 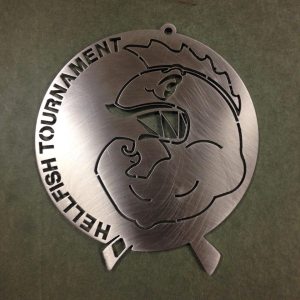 who wouldn’t want to win this?

Since I have barely been able to start drilling again and only rolled a few times in the last couple of weeks, I decided it wouldn’t be wise of me to actually fight in the tournament but I told my instructor I’d come and help out since I was going to come watch anyway.

I arrived early and helped with organizing everyone into brackets as we were getting their registration forms. After seeing so many people I know sign up and watching them get ready to compete, I definitely got the bug and I decided that I wanted to do it. I told my coach that I was going to register and he gave me a disapproving look and told me he didn’t think it was a good idea. I whined like a 2-year old and said “but I really want to and I want one of the medals…” and he told me to relax and just enjoy the tournament as there would be others. Sigh. Fine.

I know he was right because I would be quite upset right now if something had happened to my knee and I had to sit out again but it was really hard to not participate. It’s funny how when I can compete the thought makes me nauseous and anxious and when I can’t compete it’s all I want to do. I am so difficult!

Instead of competing, I got to keep score at one of the tables (we had two matches going on at once) for most of the tournament which was actually quite stressful in its own way. I kept worrying I would mess up the score and end up costing someone the win. It is also really hard not to pay attention to the other mat when one of your teammates is competing or when you hear a lot of cheering.

I also had the experience of watching one of my students compete for the first time. It feels weird to say “my” student as she is the gym’s student but she got her start in the women’s class and only trained with me for the first few months of her jiu-jitsu career so I feel very responsible for her.

Being that this was a small in-house tournament and that she is the tiniest of tiny (she weighed in at 108 with all her clothes and her sweatshirt on), her only opponent had a 25-30 pound weight advantage on her. Despite this and the despite the fact that she woke up feeling sick, she still went out there and fought her heart out for two solid fights (they fought a best of 3 series). She didn’t get the W but I was really proud of her for working up the nerve to compete and giving it all she had.

Experiencing the tournament as a coach instead of competitor gave me a whole new perspective on competition. Whenever I lose in a competition, I feel like I let my coach down. Even though he has told me numerous times he doesn’t care about winning and losing, I can’t help but feel he is disappointed when I don’t win.

I can honestly say I felt so proud of her for stepping out there that I would not have cared even if she got submitted right after bumping fists. I am hoping this new perspective on competing will help me lighten the mental baggage I like to take with me every time I compete. But enough about me. Way to go Carrie, you rocked the mat on Saturday 🙂

This week in BJJ and MMA

Just a girl out to prove that true strength comes from within.

A blog about Jiu-Jitsu, the universe, and everything

A Blog all about Jiu Jitsu, and how I have evolved whilst studying it.

A Skirt on the Mat

One Gal's take on Brazilian Jiu Jitsu and everything in it

Doing, not saying. Being, not wishing.

No Guts, No Glory?

The Domain of A. T. Greenblatt

The Exploits of a Lazy Grappler.

I will not be governed by fear, exhaustion, or pain. I will not bury my head in the sand or turn away from an opportunity. I am grateful for what I have, but I will continue to reach for it is striving that defines me.

The gentleman's gentle art of lying on the ground and rolling with the other gents.

The Modern Art of Muay Ski-Jitsu...

Blatherings of a Jiu Jitsu Addict

Learning to ride the waves

Smile! You’re at the best WordPress.com site ever

"Be gentle, kind and beautiful, yet firm and strong, both mentally and physically." ~Sensei Keiko Fukuda

Crawl Atop Me and Meet Your Doom