Today I am very excited to bring you my first ever gear review. I was approached by the very nice people at Fight Co, http://www.fightco.co.uk, a couple of months ago about doing a review for them. I definitely have a minor obsession with buying gear for training. I couldn’t tell you how many gis I have and I purposely don’t count them as then I will have to admit I have a problem and seek treatment. So naturally I jumped at the chance to pick out something new to try and review.

Because Fight Co is a UK based site, they had some companies that I haven’t seen much on this side of the pond (as they say). I really liked the Raven Fightwear gear, specifically their Four Horseman Fight Shorts. It was hard picking just one but I really liked the War ones so I selected them. You can check them out here: http://www.fightco.co.uk/clothing-c44/fight-shorts-c46/mma-shorts-c48/four-horseman-fight-shorts-war-p922.

I really liked the looks of these shorts when I got them. I know that many people like just plain shorts, gis, etc. I personally don’t mind a little bling with my gear and although these have a fairly large design, I didn’t think they were tacky or overly flashy. I really liked the knight on the front. The text on the back comes from Revelation I believe and reads:

“When we broke the second seal,
I heard the second living creature saying,
“Come.” And another, a red horse,
went out; and to him who sat on it,
it was granted to take peace from the earth,
and that men would slay one another;
and a great sword was given to him.”

This is probably a little heavy for training shorts. I briefly felt like the fate of the world was resting on my ability to submit an opponent (sorry world). Also I guess that if you wear these shorts you sort of have to accept that people might be reading your butt. As someone who likes to play turtle, I don’t mind giving people something to pass the time while I try to figure a way out. 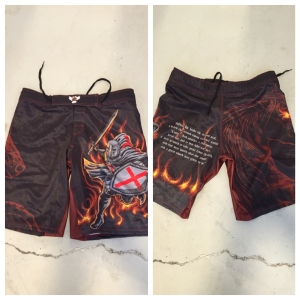 I really liked the feel of these shorts when I put them on. They aren’t the typical material for shorts (think Venum and similar companies) but were very stretchy and soft. This lead them to be a little heavier when sweaty (and since it was in the 90s and my gym has no AC, they definitely got sweaty) but not something that bothered me too much. I did notice that they also rode up a lot. Not a big deal for me because I always wear compression shorts under my fight shorts but might be more aggravating if you don’t wear anything under.

I got to test these out in two classes this week. First up was conditioning class. In this class we do a ton of annoying things like pushups, squats, lunges, sit-throughs, etc. so I definitely got to test out the movement. I felt like they kept up with me well other than the riding up I mentioned. As an added bonus, every time I felt like giving up I looked down at my knight buddy and didn’t want to let him down so I kept going.

Next up I got to test them in jiu-jitsu. I felt like with a knight of war on my side, there was nothing that was going to stop me so I picked a couple of higher belts to roll with and figured we’d have our way with them. Well that didn’t work out so much (the product description doesn’t mention super powers but I was really hopeful) but the shorts worked out really well for rolling. I didn’t feel them or notice them which is all I am looking for in shorts. Again, I did notice I had to pull them down a lot but that is not really that unusual.

I found these shorts to be really comfortable and I really liked the feel of them. They got me through some tough classes in some ridiculous heat so I can’t ask for much else. I have a feeling the other 3 horsemen will find their way into my wardrobe eventually.

Special thanks to the people at Fight Co for giving me the opportunity to do my first review.

This week in BJJ and MMA

Just a girl out to prove that true strength comes from within.

A blog about Jiu-Jitsu, the universe, and everything

A Blog all about Jiu Jitsu, and how I have evolved whilst studying it.

A Skirt on the Mat

One Gal's take on Brazilian Jiu Jitsu and everything in it

Doing, not saying. Being, not wishing.

No Guts, No Glory?

The Domain of A. T. Greenblatt

The Exploits of a Lazy Grappler.

I will not be governed by fear, exhaustion, or pain. I will not bury my head in the sand or turn away from an opportunity. I am grateful for what I have, but I will continue to reach for it is striving that defines me.

The gentleman's gentle art of lying on the ground and rolling with the other gents.

The Modern Art of Muay Ski-Jitsu...

Blatherings of a Jiu Jitsu Addict

Learning to ride the waves

Smile! You’re at the best WordPress.com site ever

"Be gentle, kind and beautiful, yet firm and strong, both mentally and physically." ~Sensei Keiko Fukuda

Crawl Atop Me and Meet Your Doom